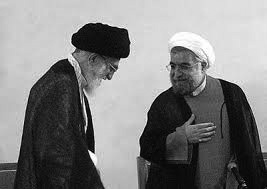 In his remarks after US new policy against the mullahs’ regime and IRGC was announced and in fear of the end of previous concessions, Rouhani, the president of religious fascism ruling Iran, left aside gestures of moderation. He announced his absolute obedience to the Vali-Faqih and disgustingly praised the Revolutionary Guards, and described the mullahs’ regime’s warmongering in the region and the killing of innocent people in Syria and Iraq as a response to the “call of the oppressed people of the region.”

Rouhani described the IRGC, being the most brutal force in Iranian history, “a powerful force … that has always been with the people.” He also called Khamenei, who is responsible for the killing of the largest number of Muslims, whether Sunni or Shi’a, as “the link of religion and politics” whose “orders” should be “obeyed”. He promised to “execute the commands of the Leader for a resilient economy.”

Zarif, the mullahs’ regime’s foreign minister who accompanied Rouhani during his speech, issued a statement entitled “The Statement of the Islamic Republic of Iran,” posted on the regime’s foreign ministry website.  In that statement he called the IRGC as a force standing “at the forefront of the fight against terrorists”, and the source for “peace for the people of the region” and “preservation of national sovereignty and integrity of Iraq and Syria “. He wrote that the mullah’s regime continues its path “under the wise and clever leadership of the Supreme Leader”.

These are while the IRGC’s old ties with al-Qaeda and the Taliban, and its role as the main party that set the ground for the creation of ISIS, are clear to everyone today, and it is no secret that the mullahs’ regime and the IRGC are responsible for the slaughter of at least 500,000 innocent people in Syria, displacing more than half of Syrian population, bloodshed in Iraq, and waging war and slaughter in Yemen.

Rouhani’s last night fearful remarks show once again how ridiculous is to portrait Rouhani as moderate which only helps a regime with a record of 120,000 political executions, and the highest execution rate per capita in the world today; the executions that have been described by Rouhani as the execution of the divine decree or the law of the country. Even if he manifests himself as a moderate in order to save the crisis-stricken regime, wherever necessary he acknowledges to being a servant for the Revolutionary Guards and the Vali-e Faqih.